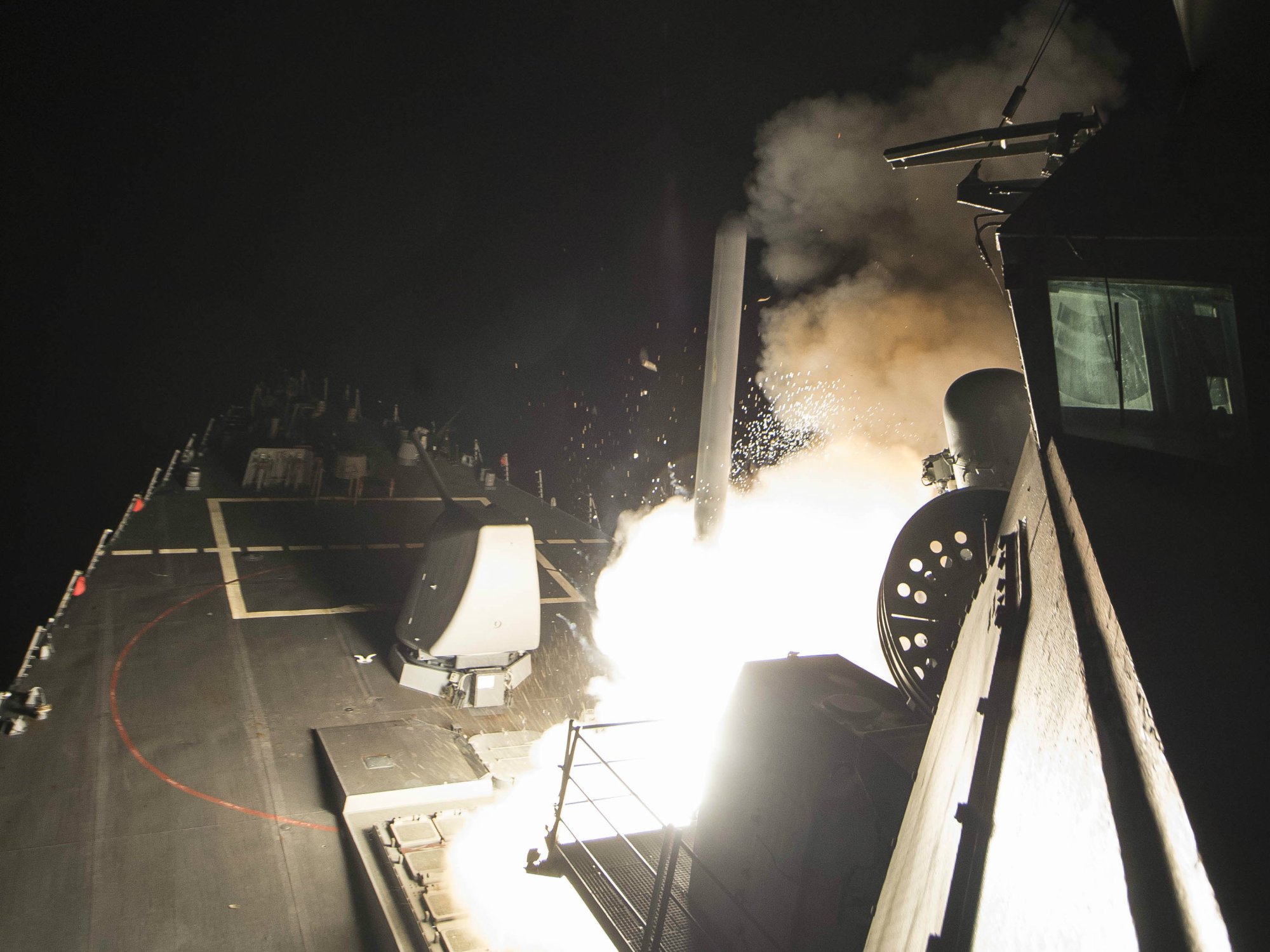 After news broke late Thursday evening that the United States had launched some 50-60 Tomahawk cruise missiles against a Syrian air base near Homs, the White House issued a statement with President Donald Trump’s official response to the military action. “Tonight I ordered an airstrike,” the president confirmed to reporters at his Mar-a-Lago estate in Florida, where he, the first lady, and adviser and son-in-law Jared Kushner were busy entertaining Chinese President Xi Jinping and his wife, Peng Liyuan. The president cited the recent chemical attack in the country’s northwestern Idlib Province, which left scores of people — including dozens of children —dead, as the tipping point behind the strike.

“It was a slow and brutal death for so many,” Trump said of the confirmed sarin gas attack, which was reportedly launched by Syrian forces. “Even beautiful babies were cruelly murdered in this very barbaric attack. No child of God should ever suffer such horror.”

The missile strike targeted a “single Syrian air base from the USS Porter and Ross in the Eastern Mediterranean,” according to NPR. According to the president, who spoke earlier in the week alongside Jordan’s King Abdullah II, Syrian President Bashar al-Assad “crossed a lot of lines” in ordering the chemical attack, which in turn prompted Thursday’s military action.

A full transcript of Trump’s remarks on the missile strike can be found below.

On Tuesday, Syrian dictator Bashar al-Assad launched a horrible chemical weapons attack on innocent civilians. Using a deadly nerve agent, Assad choked out the lives of helpless men, women and children. It was a slow and brutal death for so many. Even beautiful babies were cruelly murdered in this very barbaric attack.

No child of God should ever suffer such horror.

Tonight, I ordered a targeted military strike on the airfield in Syria from where the chemical attack was launched. It is in this vital national security interest of the United States to prevent and deter the spread and use of deadly chemical weapons.

There can be no dispute that Syria used banned chemical weapons, violated its obligations under the chemical weapons convention, and ignored the urging of the UN Security Council. Years of previous attempts at changing Assad’s behavior have all failed, and failed very dramatically.

Tonight, I call on all civilized nations to join us in seeking to end the slaughter and bloodshed in Syria, and also to end terrorism of all kinds and all types.

We ask for God’s wisdom as we face the challenge of our very troubled world. We pray for the lives of the wounded and for the souls of those who have passed. And we hope that as long as America stands for justice, that peace and harmony will, in the end, prevail.

Goodnight, and God bless America and the entire world. Thank you.