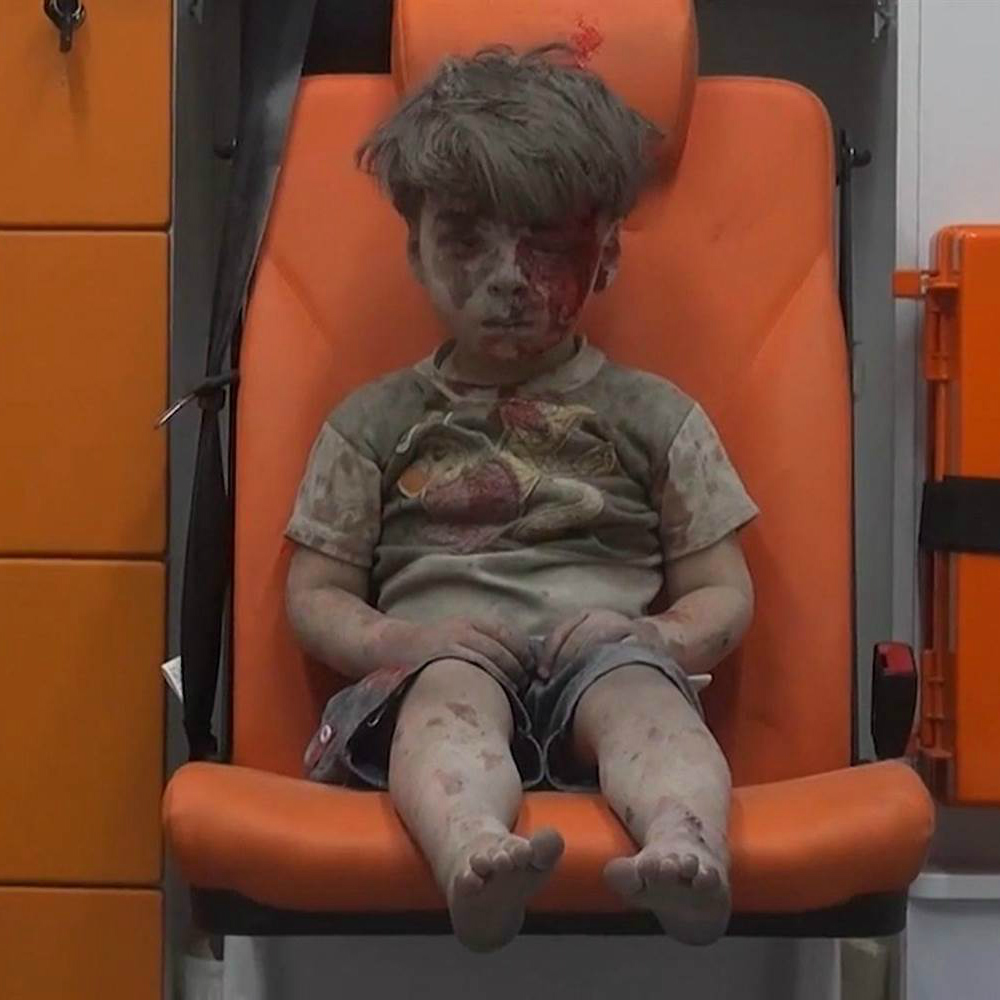 Social media is a cruel thing. Buzzing, pre-dawn, with notifications of Wall Street buyouts, crude oil prices, celebrity wardrobe malfunctions from the night before, when children in high heels and expensive jackets teeter out of clubs they have no business in, drunk and high on their own flash success. The Kardashians themselves are their own 24-hour news cycle. What did Kim post today? Is Kylie dating _____? What does Khloe think of Scott? “The Kardashians love to garden as well!”

Midday, Twitter is loaded with updates on smiling Olympians, holding their fourth career gold. Donald Trump has informed the public that he’ll be the best at the military. Hillary Clinton’s camp is busying itself swatting away rumors of yet another email controversy. #ImWithHer, #TrumpPence, #TeamUSA trend. $280,000 worth of Nancy Reagan’s jewelry goes up for auction.

At the top of the trending list is Omran Daqneesh—or rather #SyrianBoy. On Facebook news feeds and splashed across heartbroken tweets, his name is simply “Syrian Boy.” Syrian Boy, pulled from the broken concrete slabs of a building in the northern, besieged city of Aleppo. It had reportedly been destroyed by the Syrian government, or Russian airstrikes — does it really matter which?—and Omran, in turn, became the face of Thursday’s news, covered in dust and blood.

Sitting in the back of an ambulance for what seems like hours (but is, in fact, only minutes), Omran is left there, alone. His photo goes viral. Video footage of him scratching his head absentmindedly, wiping the blood onto the orange cushions becomes the theme of the afternoon.

“This picture of a wounded Syrian boy captures just a fragment of the horrors of Aleppo.”

Over on CNN, anchor Kate Bolduan becomes visibly emotional at the sight of 5-year-old Omran, sitting by himself, still stunned by the bombing. He doesn’t cry, she notes. “According to activists, this is Omran,” she says, her voice noticeably catching. She reports on the UN, which has long been pleading for a 48-hour reprieve from the fighting so that it might funnel supplies to the people left living inside the city’s borders; the 250,000 killed overall since the war began in March 2011; the 50,000 children among the fatalities statistics, 4,500 in Aleppo alone.

Over the next 48 hours, Omran’s story might live on in angry letters from humanitarian groups to world leaders, delayed reaction posts from social media users too focused on the Ryan Lochte robbery scandal to have seen Omran’s dusty, blood-stained face the first time it made headlines. In a few months, a film crew might even make the hike to the Syrian basement or bomb shelter into which his parents will move him next, to shelter him from more attacks. They’ll interview him, show his photo in a split-screen, remark about how well he’s doing. “This was Omran 6 months ago, now look at him,” they’ll marvel. They won’t really look at him.

If they really looked at him, they’d see the 15 unidentified children — all boys—killed when the military launched a mortar attack on their school in November 2014; or the face of another 5-year-old, a girl this time, who somehow managed to survive a brutal firebomb by ISIS fighters in the eastern province of Deir el-Zour April 2014; the estimated 3.7 million children born to Syrian parents amid the chaos of those five years of fighting, all of whom have known no life but the hell they’ve seen hiding in broken corridors or starving slowly in boats or hordes of tired refugees. 151,000 of them have grown up inside tents, hearing over staticky radios that a politician in America wants nothing to do with them.

Dozens of American states promise that they will ban any who try to enter their borders. Refugees fleeing the bloodshed of the Syrian civil war are told they are untrustworthy, murderous, deceitful. Social media users with angrily patriotic profile pictures and waving flag banners laud the fact that their presidential nominee will “bomb the shit out of them.”

In Syria, over the next few months, perhaps Omran will live quietly, despite Trump’s promise. Yes, despite the Russians pledging to back Bashar al-Assad; despite red-faced pundits arguing that his family might, in some surreal, imagined world, launch an attack on Americans to rival the one that nearly killed him; despite radical cells splintering and mending again and again, creating new geopolitical quagmires by the second, perhaps he will live on.

Or perhaps he won’t. Perhaps in 12 months, a humanitarian group that has managed to weave its way past the boundaries of shattered glass, bloodied curbs, and the ashes of its former inhabitants, left to rot in the streets, will find Omran somewhere in the rubble of another collapsed building, drape him delicately and morbidly across a stretcher, covered again in that thick, Syrian dust, and snap another photo. No one outside the makeshift hospital room will pay him any mind.

But for now, he makes for good headlines.